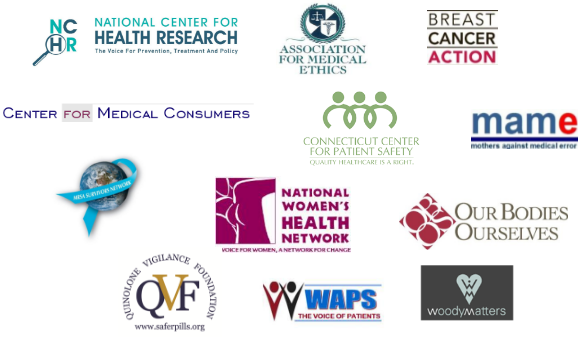 Comments of members of the Patient, Consumer, and Public Health Coalition on

FDA defines financial conflicts of interest as financial ties during the previous 12 months, so even extensive financial ties in the recent past – or even 12 months plus one day earlier — do not require a waiver. And yet, FDA’s determinations of appearances of conflicts of interest seem to last for years, even decades, if the latter involves a person who previously expressed concerns about a company or a product. On the other hand, Advisory Committee members who previously favored a product are often considered to have important knowledge and experience, rather than having an appearance of a conflict of interest.

The FDA advisory committee that met in 2011 to discuss whether Yaz oral contraceptives are too risky to stay on the market is a perfect example of the one-sided way FDA considers these appearances of conflicts of interest. Dr. Sidney Wolfe was not allowed to vote because he had previously expressed concerns about Bayer’s Yaz. On the other hand, Advisory Committee members with extensive financial ties to Bayer that were more than a year prior voted in support of Yaz (and Yasmin, Beyaz, and other contraceptives made with the hormone drosperinone). This shifted the vote to keep these pills on the market. In other words, many conflicted advisory committee members weren’t counted as “conflicted” because their financial ties were more than a year old. In addition, doctors who had previously prescribed Yaz and other contraceptives made with drosperinone, or who had stopped prescribing it, were allowed to be voting members of the Advisory Committee. In our view, those treatment decisions reflect potential sources of bias or knowledge (whichever interpretation that you prefer) that predates the meeting, that was no less than bias or knowledge that Dr. Wolfe might have had prior to the meeting.

Similarly, at the 2016 Advisory Committee meeting on Chantix, consumer representative Kim Witczak was removed from committee because the FDA identified the appearance of conflicts of interest based on incidents that were well over a year old – in fact, one of the two conflicts FDA cited was over 10 years old. The one that was just over a year old consisted of her speaking during a public comment period during the previous FDA Advisory Committee meeting on the same topic. And yet, 11 of the 27 members of the Committee had previously voted for or against warnings about Chantix at that same meeting. Why was Ms. Witczak’s 3 minutes of public comment disqualifying as a conflict of interest, but comments and votes from previous Committee members were not considered disqualifying? Why was it assumed that Committee members would be open-minded enough to consider new evidence, but Ms. Witczak was not considered open-minded enough to do the same?

For committee meetings reconsidering safety issues for popular products such as Vioxx, Avandia, Yaz, osteoporosis drugs, surgical mesh, hip joints, and breast implants, advisory members who have frequently prescribed or implanted the products being reviewed are not considered biased and also do not need to have waivers. Isn’t the fact that the doctors prescribed a product an indication of an appearance of a conflict of interest in favor of the product? These potentially more knowledgeable but possibly less objective members influence how others vote at least as much if not more than a public health expert or researcher who has previously spoken about or written about the risks or benefits of a medical product.

The National Center for Health Research did a study of FDA Advisory Committee meetings and members of this coalition have attended dozens of them. It is clear from these meetings that many Advisory Committee members are clinicians who want more treatments to be available, making comments such as “if this drug can help one patient, we should get it on the market.” FDA’s responsibility is to make decisions based on scientific evidence that patients are more likely to be helped than harmed by a new medication or medical device. They are asked to provide their perspectives based on objective analysis of the information provided, not on speculation or wishful thinking about whether a drug might “help at least one patient.” Those hopes can appear to be a conflict of interest.

Whether FDA Advisory Committee members have financial conflicts of interest or other types of bias, the standards in terms of the numbers of years should be identical. One year is too short, and 10 years is too long. In industry and academia, 3-5 years is generally considered to be an appropriate amount of time to consider such conflicts. Equally important, bias in favor or opposed to a product should be equally disqualifying; either the Advisory Committee members are able to have an open mind to consider new information, or they aren’t. Disqualification on the basis of an “appearance” of a conflict of interest should not depend on whether the sponsor is opposed to having that person on the Committee.

Thank you for the opportunity to share our concerns regarding the Draft Guidance.